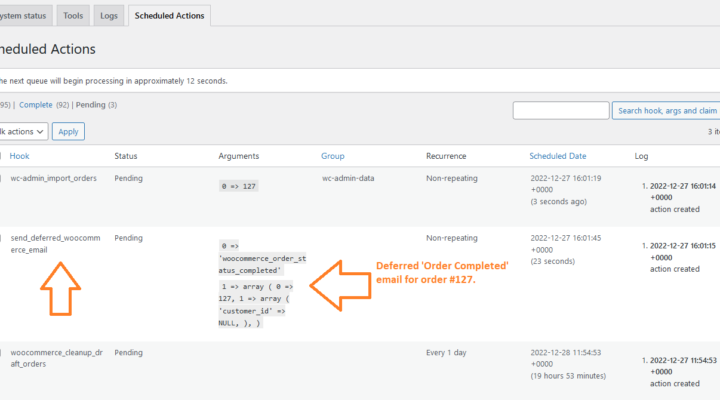 Defer WooCommerce emails for a specified time after the normal delivery time.

Update 4 May 2022: I have significantly changed the algorithm for the execution of the deferred emails. Instead of calling the email function I call action hook they were added to. This makes the code generic i.e. it will run all functions/emails attached to the deferred action hook.

After completing the code for Add Tracking Info to WooCommerce order Elizabeth reported intermittent issues where the tracking info was not in the Order Completed emails. I suspected that there was a small delay with Shippo pushing the tracking data back to her site. Shippo suggested delaying the Order Completed email to allow for the small delay (which could be a few minutes).

Stepping through the code

When WooCommerce 3.0 was released it deferred transactional emails (i.e. emails sent when the order status changes) by 5 seconds (increased to 10 seconds in later release). Deferring the emails was primarily to speed up the checkout process. In version 3.0.3 this was disabled by default but could be enabled with a filter.

I read through the WooCommerce code and later stepped through it with Visual Studio Code. The debugging confirmed what my code reading found – there was no WooCommerce filter to change the delay time from 10 seconds. I even looked at filters in the wp_schedule_event() function but there didn’t appear to be enough data to idenfity WooCommerce email events.

I found that another developer, Dan Wich, encountered the same issue. While typing a comment on his post I got an idea – set up my own scheduled event!

It happens frequently when, after extensive investigation and debugging of an issue, writing a post on a forum gives me an idea for a solution. It’s a sort of ‘a problem shared is a problem halved‘ type thing.

My experiments in trying to find a filter were very helpful in finding the existing WooCommerce filters that I needed to use. The final logic is quite simple:

When an email is deferred you can see it in a list of scheduled actions (under WooCommerce/Status/Scheduled Actions). I installed Advanced Cron Manager plugin while testing. The scheduled event is called ‘send_deferred_woocommerce_email‘. The arguments are the order number and the email identifier.

My initial code only deferred the Order Completed email but I generalised the code to allow any WooCommerce transactional email to be deferred and a different delay time for each one. 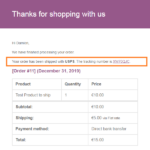 Use CMB2 to add a custom metabox to add tracking information to WooCommerce orders. The information is then added to the "Completed Order" email.

Add an email address (or two) as BCC to all WooCommerce emails. 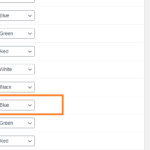 Attach a file to the WooCommerce Order Completed email if a specific product or variation is in the order.