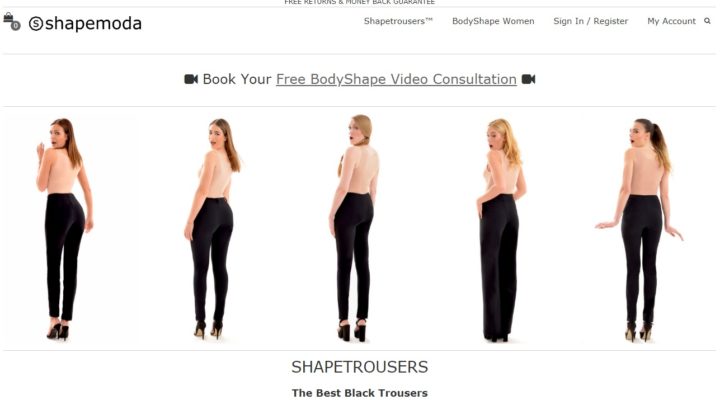 A new mobile first, WooCommerce site built to be lean, fast, easy to use and maintain.

The main issue was that the site was slow – slow for visitors and slow for admins.

Over 6 months I worked hard to make the site faster and more stable without taking the site offline. I removed unnecessary plugins and wrote code to implement features in a future proof way (e.g. use WooCommerce actions instead of modifying template files).

In late spring 2018 the site owners told me of their new business model (for Shapetrousers™) and new business name, shapemoda. They wanted a new site that would work well on mobile devices (which most of the existing clients used) – and be faster. Without the burden of the old site I was able to start from scratch.

I am a big fan of the Genesis framework when building a website. It is lean and subsequently it is fast. This was my starting point. I only included plugins that were absolutely necessary.

Annaoliva and Vanessa frequently showed me features of the luisaviaroma fashion site that they loved. I implemented some of the features on the shapemoda site e.g. changing the variations layout.

The Shapetrousers™ products are custom made so take a little longer to receive. When one of the products is ordered the increased delivery time is mentioned in the order email via a note added to the email.

The old site’s home page was very difficult to update. Annaoliva and Vanessa used to dread updating it.

The Divi theme uses a visual editor; while this can make a site easy to update, it simply didn’t work as expected. This was likely due to one of the many active (but necessary) plugins.

On the new site I decided to use Advanced Custom Fields Pro to make it super easy. I included helpful instructions with each section and enabled settings to prevent incorrect data being used e.g. limit image sizes.

In February 2018 I spoke at a Dublin WordPress Meetup, delivering the Child Themes talk I gave at WordCamp Dublin. During the Panel Q&A someone asked about a recommendation for a web host. One of the suggestions was the Manchester based 34SP. I looked into their WordPress hosting and created an account. They copied the site to their servers and helped me with configuration questions.

I have so far been impressed. Their support is helpful and responsive (I’d love if they had live chat like Blacknight, where this site is hosted) and their security is great – the wp-admin and wp-includes directories cannot be edited!

Even better is that is that the shapemoda site works very well there.