Google
You are here: Home / Race Reports / Ray D’Arcy’s Half Million Half Marathon for Laura Lynn 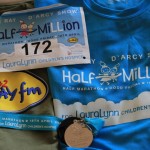 I cycled to the Phoenix Park and parked my bike. It was sunny just as it was for the 10k the previous weekend though a good bit warmer. I wore my lighter singlet. I got my race number and did a little warm up, running and stretching while moving towards the start line. The announcer encouraged us to move to the start area so I got in place for 9:45.

Although the run was due to start at 10am, it was about 10:05 before Ray got to the podium to speak (I guess that they were waiting for the news and ads on the radio to finish). Ray spoke a bit, thanking everyone for the money they raised. Then Jane McKenna, the mother of Laura and Lynn spoke, with more appreciation for us. Then a guy lead us through a warm up.

I set up the Virtual Partner on my Garmin for a goal finish time of 1h30m. It was then that I realised that I didn’t have my stopwatch on to record mile splits. A bit annoying. We kicked off shortly after 10:20.

I started gently and picked up a bit to get into space and find my pace. Slight downhill along Chesterfield Avenue before turning onto Lord’s Walk. Good cheering crowds at Phoenix Monument and at Lord’s Walk junction.

At around 2 miles a guy was running beside me. We chatted very briefly. We kept a very similar pace for the next few miles.

More crowds at Mountjoy Roundabout. I got a cup of water at the water station there as I knew that it would be another 4 miles before I would pass it again.

Down into Furry Glen and the guy dropped back. It was very tranquil and calm in the Furry Glen. After climbing out it was a nice downhill towards Chapelizod Gate.

The sharp climb up Acres Road slowed me down and it is a pace-slowing drag all the way up to the main road. I was a little concerned that my 1h30m target could be undone as I would have to endure this drag twice. The runner from the 2 mile mark joined me again on Chesterfield Avenue as we passed the leading woman. Numerous people were cheering her on.

Back at Mountjoy Roundabout I got more water and began passing joggers. It was still a nice quiet trip through Furry Glen again. On the downhill towards Chapelizod Gate I passed so many people that it felt like I was running really fast. I climbed Acres Road quicker this time, probably because I pushed it more than the previous lap.

It was a relief to turn left onto Furze Road while many continued on their second trip through Furry Glen. The next person was well ahead of me but I pushed on. A few people encouraged me to “Finish strong”. It was nice to have the finish line to myself as there was a good gap either side of me.

I heard the first woman home being announced. It wasn’t the woman that I passed before the 8 mile mark. She probably turned onto the finish stretch one lap too early. I guess she admitted her mistake as she wasn’t listed in the results.

I had to pause in the finish area to recover enough to leave it. I met up with my dad and chatted at my bike for a bit before I cycled home.