Good arm pumping helped me up the hills but the lack of run training made for a slower time than last year.

I was only able to do two run training sessions before this race. My other training sessions were for the forthcoming Ring of Kerry charity cycle. My first 5 mile training run took a disappointing 34mins and that included feeling like stopping after 2k. The next run, two days later, was a more respectable, but still slow, 32m38s.

The day was overcast. I left home around 9:20 and parked close to the finish line on Furze Road. Warmed up on Furze Road and on path beside start area. Stretched too before entering start area.

In the starting area Marie came up to me. She was hoping for sub 37mins and I was aiming for around 32mins. We talked about being woken up by kids and being tired. There was a light mist which was welcome as the sun was itching to get through and it was a little humid.

It was busy for the first mile or so, especially at the first roundabout where we all had to slow considerably as the road narrowed. My first km was a slow 4m10s and the first mile was about 6m35s. The drop down the Kyber Road was welcome and the crowd spread out a bit.

On the climb up Military Road I pumped my arms a lot and easily passed a number of people that were struggling up the incline. I grabbed a cup of water from water station as it was humid. 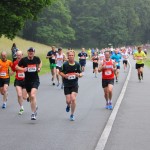 On the climb up Upper Glen Road I pumped the arms again and, like before, passed a few people. It was a relief to crest that incline and know that it was flat to the end.

On Furze Road I saw that I had about 500m to go so I tried to up the pace a little. I saw a guy out of the corner of my eye and he kept with me until he sped up even more with about 300m to go. I had managed to catch a few others and crossed the line in 32m07s.

I was happy with my climbs and not surprised with slowish time, about 36s slower than last year.