I endured sore glutes early on to complete the cycle with a good average speed. The lightly overcast start was welcome and it only warmed up in the latter half of the day.

I set my alarm for 6am, intending to start earlier than last year and beat the crowds. I planned to get up at 5:30 but was too tired to set the right alarm time.

I had a big cup of tea and 3 Weetabix and got my gear on. Then I realised that I didn’t have my event wrist band or number – they were in the car but I could not find the car keys. Thankfully my father in law was able to get a band and number from my brother in law next door. I headed out the door at about 6:50, at least 15 mins later than planned.

As always it was very crowded to Killorglin but I did manage a few bursts of overtaking when it was safe to do so. They changed the route in Killorglin so the water stop didn’t attract as many people as usual. I kept a good pace all the way to Caherciveen, getting there in just over 2 hours. They implemented a one way system for the water/food stop that alleviated the usual congestion. I stopped to use the portaloo, refill a water bottle and have some flapjacks. There was a queue at the men’s toilets and none at the women’s because there was twice as many women’s toilets as for men. While this is great for women, it didn’t reflect the makeup of the participants, but no biggie. I saw that my average speed was just over 25kph so I decided that I would try to maintain that for the day. For some unknown reason my glutes were really sore and had been from early on. My bursts of speed weren’t helping matters but I wasn’t going to stop those.

I stopped in Waterville for some chocolate and a banana before the climb up Coomakista. I got stuck behind some very slow people at one point – they were doing a frustrating 8mph!! I eventually passed them and powered up to the summit. I stopped again for the toilet and to refill my water bottle.

It was quite pleasant from there to Sneem. Again the food/water stop at Sneem Hotel was nice and quiet. I had a Snickers bar, a nice cup of tea and more flapjacks.

A road sign told me that it was 26km to Kenmare so I knew that I should be able to make that in about an hour. During this segment I found the missing car keys in one of my jersey pockets! I texted home and a reply said that they had to laugh because otherwise they’d cry – they’d spent at least an hour turning the place upside down looking for them. I have no idea how they got there. I kept a good average speed to Kenmare.

Like last year, I skipped the food/water stop in Kenmare. Two girls had set up a small table with water. I filled up my water bottle again. For the first few km up Moll’s Gap I tucked in behind 3 guys with identical jerseys. After a while I found them to be going to slow for me – they were doing about 11mph. I passed them and picked up the pace to 13 or 14mph. I passed a good few people before the summit. I don’t think that anyone passed me!

I got a banana and a chocolate bar at the summit before the final 30 or so km to home. The technical section from Ladies View wasn’t as crowded as previous years but I still took care. At one part I saw a guy walking his bike. I stopped on the next corner and waited for him. When I saw him I asked if he needed a tube but he had burst his tyre. I happily gave him the old spare I had. He tried to give me money and take my mobile number to pay me later but I declined both offers. The tyre was quite old so of no use to me and probably just good enough to get him home. He had all the tools he needed to install the tyre so I headed off again. 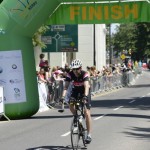 The finish line was moved from the Gleneagle Hotel to the middle of town. This eased traffic congestion considerably and the roads around the finish were closed. I signed in and collected my certificate.

The final 8km back to home is the hardest because it is end of a long day and because the poor road surface is energy zapping. Caitriona and Rory met me at the end of the driveway.

I had some food, had my protein drink and a nice shower. My glutes, thighs and knees were tender for the next 24 hours but I was very happy with my time and average speed.