A reasonable time on a cold day despite a slow initial 500m when I adhered to Ray's instruction to stay behind him. 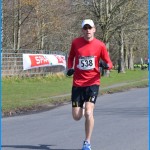 The Join Ray for 5k runs are intended for new runners, like those that have recently finished a Couch to 5k programme. I signed up for it as a bit of a training run. It was very cheap (€5) and included a technical t-shirt (hi-viz yellow).

Although it was sunny, the wind made it a cold morning so I wore a heavy long sleeved base layer, compression shorts and gloves.

I cycled to the Phoenix Park and parked near the finish line. I followed the warmup lead by a woman on the stage. Then Ray spoke to the crowd. The first thing he said was that those looking for a PB should feck off home as this wasn’t a race. He said that everyone had to stay behind him for the first 3km. I was disappointed as I knew that Ray was about 5 mins slower than me over 10k.

When the run started I held back for a few hundred metres until I saw that a number of people were already way ahead of Ray and those chatting to him. I picked up the pace considerably to try catch the leaders. I passed a number of people over the first 3k before my lack of fitness began to show and was forced to ease off.

I was reasonably happy to finish in 19m45s especially considering the slow initial 500m.

I use cookies to ensure that we give you the best experience on my website. If you continue to use this site I will assume that you are happy with it.OkPrivacy policy